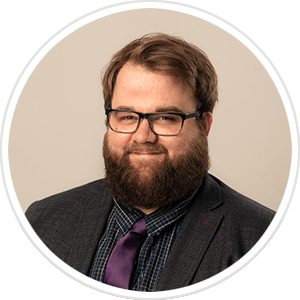 Tom was born and raised in Port Williams, Nova Scotia. He graduated from Dalhousie University with a degree in International Development in 2014 before moving to Fredericton to pursue Law at the University of New Brunswick, graduating with his Juris Doctorate in 2017.

After starting his career at a local personal injury boutique firm, Tom joined Valent Legal in March 2019. He is passionate about improving his clients’ lives through the law and using humour to make the legal profession more accessible – something he tries to do every day at Valent Legal. His practice includes personal injury and accident claims, disability claims, privacy claims, representing victims of abuse, human rights claims, small claims matters, and other forms of advocacy.

Outside his practice at Valent Legal, Tom has a long history of being involved in the performing arts and musical communities of Halifax. When he isn’t at work, he can likely be found performing improv comedy or stand-up comedy. You might even catch him with his trusty guitar ‘Julius’ at an open mic night, playing far too many Bob Dylan and Tom Petty covers.

“Tom Champion, of Valent Legal,  handled our sensitive case with outstanding professionalism, guiding us through every step with patience and grace. The sensitivity and respect he showed toward us never wavered throughout the long process. In spite of some daunting challenges he skillfully negotiated a successful settlement, but more importantly he succeeded in restoring us emotionally as well. Tom has earned our loyalty and we sincerely recommend him to others who may be in need of legal services.”