Home Will My Personal Injury Claim Go To Court?

Will My Personal Injury Claim Go To Court? 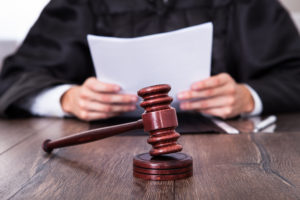 In the unfortunate event that you have suffered an injury from a car accident, you are most likely dealing with a lot of stressful questions. Many people have never been involved with the personal injury claims process and are unsure of what to expect.

A common question our law firm gets from people looking to pursue a personal injury lawsuit is if their claim will end up in court. While the idea of being involved in a personal injury court case can be overwhelming, it is important to understand that engaging a lawyer to help with an injury claim does not automatically mean you will eventually be sitting on the witness stand answering questions under oath.

When Do Personal Injury Claims Go to Court?

Usually, the first stage of an injury claim will involve negotiating a settlement directly with an insurance company. Having a lawyer assist you at this stage is very important to ensure you are treated fairly and your interests are appropriately advanced. At this early stage, an experienced personal injury lawyer will gather all the necessary information to assess liability and the amount of compensation you are entitled to.

Sometimes, if liability is in dispute or if there is a disagreement on the amount of compensation you may be entitled to, it may be necessary to file a Notice of Action (also known as a lawsuit) with the court, which is then served to the other party. If that party chooses to defend the Action, they will usually retain legal representation and file a Notice of Defence.

There is a dispute over who is at fault

Your insurance provider will determine the degree of fault to be assigned to each driver based on the rules set out by the Automobile Insurance Fault Determination Regulations. As part of an insurance policy contract, all parties involved have the right to disagree with a fault determination and appeal the decision. Suppose a settlement cannot be negotiated outside of court. In that case, an independent arbiter (i.e. a judge) may need to determine who is at fault.

There is a dispute over compensation

If the insurance provider thinks that you are pursuing more compensation (also known as “damages”) than needed, they may only pay a portion of your damages or refuse a payout entirely. Disputes over damages can arise when an insurer believes you received unnecessary medical care, vehicle repair costs are too high, or the cause and severity of your injuries are in question. If these types of issues remain in dispute, it can cause a claim to go to court.

When filing an insurance claim, negotiating on behalf of all parties involved is done through the insurance companies to determine fault and a settlement for damages. When initiating the car accident trial process through a lawsuit, you are suing the at-fault party for compensation through the court of law.

Deciding whether you should file a claim or a lawsuit should be based on the severity of the injuries you sustained from the car accident and the nature of disputes (if any) over damages. Talking to a personal injury lawyer can help you decide which type of action is the best way to get the payout you deserve.

The claims process tends to be more straightforward than a lawsuit. You can file a claim with your insurance provider or the other party’s insurer if you consider them to be at fault. Once the claim is filed, the insurance company (or companies, if you were the only party involved) will investigate the nature of the accident to determine fault and compensation.

Suppose the other driver’s insurance company contacts you. In that case, it is essential to remember that they are not your friend. Their goal is to pay out as little as possible or pay nothing at all if they can. It is in your best interest to seek legal counsel before saying anything to the other insurance company or have your attorney take over discussions for you.

Most personal injury lawsuits are filed after an insurance claim has resulted in low settlement offers, or an insurer has denied liability entirely and will not pay for damages. Once the lawsuit is filed, your lawyer will submit the Notice of Action with the court and serve it to the other party (also known as the Defendant). In Nova Scotia, you generally have two years from the date of the accident to file a lawsuit with the Court, which is subject to certain exceptions such as filing a lawsuit against a Government body.

Hiring a personal injury lawyer for the entire process, be it a claim or a lawsuit, will also allow you to focus on healing from your injuries. Additionally, their knowledge and expertise in the field will increase your chances of getting the compensation you are entitled to.

Why Do Most Personal Injury Cases Settle Outside of Court?

There are several different stages in an injury claim before the parties involved find themselves arguing a case in front of a judge. The fact of the matter is that most injury claims are resolved without bringing the personal injury case to trial. In fact, less than 1% of injury claims in Nova Scotia go to court. Resolution is often reached through out-of-court negotiations.

After the Notice of Action for the lawsuit has been served, the parties will then usually exchange relevant documents and may proceed to Discovery Examinations (also known as Depositions). Discovery Examinations take place in a boardroom, not a Courtroom. They allow both sides to understand each others’ cases and the claim’s strengths and weaknesses should it proceed to court. Often, once Discoveries are complete and the parties have a better understanding of the facts and evidence, parties may enter or re-enter negotiations on a settlement.

Even if disputes on the claim continue after Discoveries and the lawsuit proceeds further into the personal injury claims court process, both parties will often continue to negotiate a settlement. Negotiations can go right up until the weeks and even days before a trial.

Typically, defendants and insurance companies want to avoid the risk of going to trial and being forced to pay out more than the initial evaluation of the injured person’s losses or damages. Another reason personal injury claims are settled outside of court is the additional stress for the injured party and the delayed financial compensation.

Will I Have to Go to Trial if I Have a Personal Injury Lawyer?

Litigation can be stressful, costly, and risky for all involved. There are circumstances where a trial may be necessary to determine difficult issues. Still, there are many reasons for parties to explore the possibility of settlement without the need for a trial.

With a trial comes media coverage, which typically does not fare well for the insurance company. To avoid damaging their reputation, insurers are keen to reach a settlement and have the injured party sign a release with a confidentiality clause.

Victims can move on

A trial can drag legal proceedings on for years before the victim sees any compensation, and that is if the ruling is in their favour. Settlements bring closure and allow the victim to move on with their life.

For the most part, injury claims are about negotiating as much as they are about litigating in court. In either case, whether in or out of the courtroom, your chances of receiving fair compensation for your injuries increase substantially with the help of an experienced personal injury lawyer.

While you focus on recovering, our team at Valent Legal will pursue the compensation you are legally entitled to recover for your pain and suffering. If you choose to retain our services, we will do everything in our power to build the best claim possible for you, negotiate with insurance providers on your behalf, and litigate in court if your case goes to trial.

Our law firm works on a contingency fee basis, which means that you will not be charged a fee until your case settles or you win a judgment in court. Contact our Halifax office today toll-free, and let’s get started.

Tell Us What Happened.
We work on a contingency fee basis, which means there are no fees until you get a settlement or you win a judgment in court. Visit how we work or contact us to learn more.
Call or Text for a FREE CASE REVIEW
+1 902 443 4488
Have questions?
Get the answers you need. It's FREE.